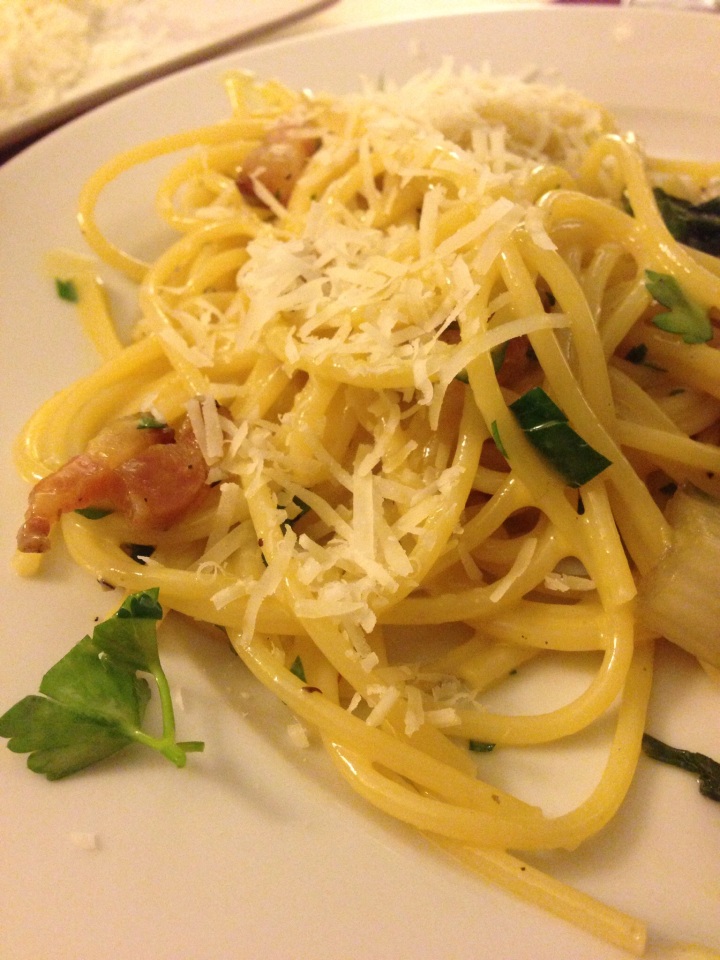 I’ve been making carbonara for a while now. Ever since I saw the worst chef in the world making it on YouTube (he said it was like scrambled egg pasta) I’ve always wanted to make it the right way. Carbonara has roots in traditional Italian cuisine with the modern twist that the dish became popular and publicized as a Roman dish after WWII.  American troops brought the bacon and the eggs that make up the core of this dish. I’ve made a few modifications, however, that are well worth it.
Guanciale is cured and spiced pork jowl (cheek). Flavor wise it is unique, chewy and porky and the spices that infuse it make plain bacon feel inferior. You could use bacon for this dish, however, and I wouldn’t say that the choice is a wrong one in the slightest. If you have a chance to make it with guanciale though the key thing to remember is that less is perfectly fine just so long as the pieces are big enough to get the nice texture and flavor.

1/2 lb. spaghetti or linguine
4-6oz. guanciale or thick cut bacon, cut into matchsticks or lardons
1/3-1/2 c. parmesan, grated (reserve some for topping the pasta on your plate)
2 egg yolks, or whole eggs if you prefer
pepper to taste
2 tbsp. chopped flat-leaf parsley

Cut the guanciale into short matchstick sized pieces. If you’re using bacon cut it into lardons, the little thin strips like in the picture below. Cook the guanchiale or bacon in a sauté pan until browned and remove the pan from the heat. You may want to remove some of the fat if the bacon gives off a huge amount of fat. Guanciale, at least the ones I’ve seen, don’t seem to give off nearly the same amount of fat. 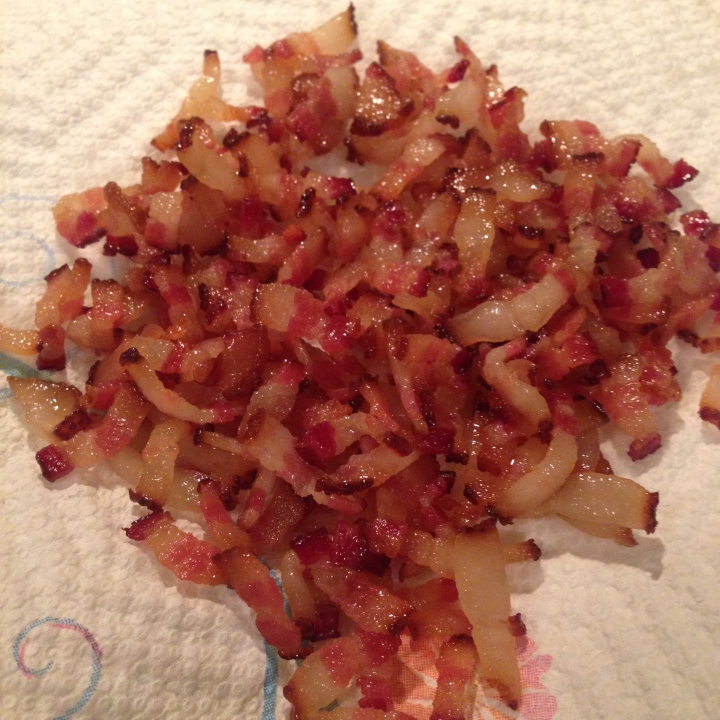 While you are waiting for the pork to cook, separate the yolks of two eggs if you prefer. Try and get nicer eggs because the dish leans so heavily on the deep eggy flavor of egg yolks from well kept chickens. On the East Coast I’m using “Nellie’s” which claim to be humane and so forth. You should taste the difference from the cheapest eggs possible.

Add the parmesan cheese to the egg yolks and beat together until the grated cheese breaks up a little. Add some fresh ground pepper to your tastes at this point.

Next cook your pasta in boiling and heavily salted water. Be sure to stir frequently if, like me, your pot isn’t used to accommodating quite as much pasta as you might like. Stirring frequently in the beginning will keep the pasta from sticking and salting the water is essential to having good tasting pasta.

As the pasta gets closer to al dente, meaning that it still has a little bite to it but is almost done, you want to take a small amount of the water the pasta is cooking in and stir it carefully into the egg and cheese mixture. Take care to add a little and stir rapidly, you are tempering the mixture so it doesn’t turn into scrambled eggs. Add maybe 2 or 3 tablespoons of hot pasta water, a small splash or two is more than enough. Reserve a cup of pasta water for later just in case it’s needed.

As soon as the pasta is al dente, strain it and add it into the pan with the cooked pork. Stir together to reheat the meat and fat left in the pan. Pour the egg mixture over the pasta and stir together. The pasta should absorb some of the sauce so add a little water from the pasta pot water you saved if it isn’t quite saucy enough (it should be saucy but not sitting in a huge pool of it).

Add in the fresh chopped parsley leaves and stir together. Serve immediately and remember that eating all of it is highly recommended as the dish doesn’t survive being leftovers all that well.